126th Session in the Maine Senate 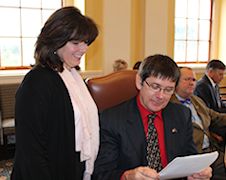 Dawn has sponsored several bills this session and co-sponsored many others. Of note are the following: a bill to seek transparency and accountability for the standards for the hospital tiering system used by the State Employee Health Commission as well as in the new Maine narrow network insurance system both of which can significantly impact York Hospital and District 1 residents as well as other hospitals throughout the state; a bill to ensure that both commuter fares and general public fares for the Maine Turnpike are fair, reasonable and subject to review by the Legislature's Joint Standing Committee on Transportation; a bill to improve the ignition interlock law by expanding the category of Maine residents eligible for this very successful program; and a bill to classify all those residents of Maine who served on behalf of our country in the armed services, whether they were in action or not, as veterans for purposes of a real estate tax reduction.
125th Session in the Maine Senate

In addition to committing 5-6 days a week during session to the work of the Appropriations and Financial Affairs Committee and persuing funding for the gateway bridges, Dawn submitted and championed several bills that became law. All but one of these bills that became law passed "under the hammer" through the Legislature with unanimous support of both the House and the Senate. A few are highlighted below and others can be viewed by clicking on the125th Session button in the box to the right.

LD 1620 - Summary - Helping the Ratepayers of Ogunquit and York: Hill sponsored a bill that was brought to her attention by members of the Ogunquit Sewer District to change its charter language for sinking fund requirements. The district, which provides vital services to Ogunquit as well as a portion of York, found that the charter language was archaic, and if followed, would create a greater financial hardship for the ratepayers. Fortunately, we were able to change the charter to avoid this unnecessary burden.

LD 1660 - Summary - Expanding Service for out of state Regional Transportation Organizations that provide regular service in Maine: Hill successfully sponsored legislation that removed a technical barrier that would have prohibited COAST, a local transit company, from expanding their service in Maine. With this new change in state tort claims immunity law, COAST will now be able to expand its public transportation operations in Maine.

LD 433 - Summary - Legislation to Encourage Municipal Cooperation:  An Act to Exempt from Income Tax the Income of Nonresidents Working in Maine Pursuant to an Inter-local Agreement, will exempt Maine’s income tax for out of state workers who perform work in Maine under an inter-local agreement between a Maine and out of state municipality. Senator Hill sponsored the legislation at the request of town officials in Kittery who were experiencing problems engaging in shared resources for a limited time with municipal interstate agencies or local governments.
This law removes the barrier of utilizing shared resources and creates greater opportunity for Maine taxpayer savings and Maine workers through inter-local agreements and collaboration. By working together, many of Maine’s cities and towns have been able to take innovative approaches to reduce local costs without jeopardizing services or raising taxes.

LD 1309 - Summary - Rabies Bill: Back in 2007, then Representative Hill successfully led a legislative effort to help enforce dog licensing through the use of rabies vaccinations. The bill, which is now State Law, requires veterinarians send a copy of the vaccination to the Department of Agriculture, which in turn, distributes the vaccination certificates to municipalities in which the dogs reside for follow up on licensing. See LD 1727 in 123rd and 124th House of Representatives section below.

Over the three year period (2007-2010) since the change in law, dog licenses increased by 29,504 along with $116,253 in additional revenue to the Maine Animal Welfare Fund and additional funds to the municipalities handling the licensing.
​
Building upon the efforts to improve dog licensing along with the help of York’s Animal Control Officer Larry McAfee, Senator Hill sponsored legislation to encourage reciprocity between Maine and New Hampshire in reporting rabies vaccinations. New Hampshire already has a similar process in use. The resolve directs Maine’s Department of Agriculture to seek reciprocity with New Hampshire to require that a veterinarian from either Maine or New Hampshire send a rabies vaccination certificate to the Department of Agriculture in the state that the vaccinated dog lives so that licensing and rabies vaccinations can be tracked in the appropriate municipality and state.
123rd & 124th Sessions in the Maine House of Representatives
From consumer protection, to environmental protection; from protecting children to using business instinct in the creation of smart law; and from public safety protection to taking a stand against Washington bureaucracy, then Representative Dawn Hill successfully created enduring and important legislation, gaining respect among her legislative peers.

The following represent just a few of Dawn's legislative highlights:

LD 340 - Summary - This legacy law, passed in the House of Representatives by a large margin (Roll Call #44), will protect Maine's shorelines, from illegal tree cutting in the shore land overlay district of rivers, lakes and coastlines. Violators who illegally cut these trees, often for water views or to "add property value" to their existing shore line frontage, will be required to pay a fine for the cutting and also pay for a reforestation plan as well as replace trees and under-story vegetation removed with ones as similar to species and size as feasible. The law was created, to protect Maine's precious shore line and to act as a deterrent from land owners/developers who have the mindset they are willing to violate the law and "pay a fine for a million dollar view." The Maine League of Conservation Voters deemed LD - 340 as one of its "ground-breaking" pieces of legislation for 2007 and the Maine Municipal Association termed the law as "municipal friendly." The law will serve to protect Maine's quality of life and natural resources which so many have come to love.

LD 1727 - Summary - In Maine, it has been law to both certify that your dog has a rabies certificate AND that your dog be licensed in the municipality in which you live. However, there was never a connection between vaccination and the licensing process. Hill's statute requires veterinarians to send a copy of the rabies certificate to the Maine Department of Agriculture, which in turn forwards it to local municipalities. This allows local animal control officers (ACO) to know if a vaccinated dog is also licensed. The law promotes public safety in that local ACO's can determine that a licensed dog does in fact have a rabies certificate, regardless of collar status. LD-1727 was deemed "municipal friendly" by Maine Municipal Association in that all revenues generated by its implementation, go in part to the local ACO, the local clerk and the Maine Animal Welfare Fund without raising additional taxes.

LD 2079 - Summary - Visual sexual exploitation of children for self gratification in a "private setting" is illegal in Maine, but until recently, doing the same in a "public setting" was not. The oversight in the law which was brought to the attention of Rep. Hill by LT. Alexander of the Ogunquit Police Department was corrected in Hill's legislation. A revision of the statute corrected the existing Maine statute to mean that if a perpetrator of visual sexual aggression against a child commits an illegal act in public, then the child falls under the same protections as they would in private locations for the same type of offense. Prior to the change in law, police were powerless to charge a suspect for such predatory behavior advanced on a child in a public setting.

HP 1654 - Summary - Throughout Maine, there are literally thousands of miles of water frontage and shoreland along the ocean, lakes, marshes, rivers, ponds and tributaries. The US government promised to identify those areas very clearly because FEMA, the Federal Emergency Management Agency, is tasked with identifying floodplain areas that are prone to possible dangerous flooding. In particular, the banking industry, when processing a mortgage for a property owner, must check with the flood plain maps to ensure that their client's property is not located in a flood plain, else they require that owner to purchase expensive flood insurance. The problem is that many of the flood plain maps in Maine are 30 years old and inaccurate resulting in millions of dollars of insurance premiums purchased unnecessarily, at the expense of Maine landowners.
Maine property owners must prove at their own cost that they are not in a flood plain, when they suspect a federal map is wrong - an additional cost due to incorrect mapping.

Hill's HP (house paper) was filed as a Resolution, insisting that FEMA, which falls under the jurisdiction of the Department of Homeland Security, fix the federal and state maps as promised and budgeted for previously by law makers in Washington. The resolve received bipartisan support in the Maine legislature and will be presented to the Maine Congressional and Senate delegation for consideration by Washington law makers in the near future.
​
The Maine Municipal Association listed FEMA's inaccurate flood plain mapping of Maine as one of its top concerns and incorporated Hill's Resolution in their recent Federal Issues Paper. The paper sets MMA's top priorities for Maine's Congressional delegation to focus on.
View a list of all bills by legislative session where Dawn was primary sponsor using the links below. From the resulting lists you can access documents providing more details on each bill. You can also access theMaine Legislature lawmaker site advanced search page directly.