​Making the Connection for Maine's Economy 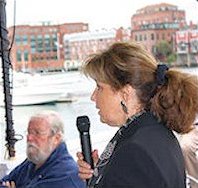 Dawn Hill is the founding owner of it's a dog's world a small Maine business established in 1998. Hill understands that to create jobs in Maine and get our economy moving again government should be a partner to small business – not a roadblock.

Gateway Bridges. A primary focus throughout Dawn's work in the Legislature has been addressing state and federal funding for the replacement of the Memorial Bridge and rehabilitation or replacement of the Sarah Mildred Long Bridge. Both bridges provide a necessary connection between Maine and New Hampshire and are essential for our region and the rest of the state. In 2011, we were able to pass legislation to reestablish the Maine-New Hampshire Interstate Bridge Authority and reaffirm Maine's commitment to doing its part with these two gateway bridges, along with the Interstate 95 High Level Bridge. Having these three bridges open and accessible is vital for business, tourism, and travel in Maine and our region.

Directional Signage. Dawn also sponsored a bill earlier in the 125th session that would have permitted signage along Interstate 95 for the Town of Kittery, local businesses, and establishments. The temporary signs would have provided directional guidance to help direct traffic to popular local destinations, similar to detour signage. After submission of the bill, it was determined that the Maine Department of Transportation could accommodate this request without the need for legislative approval, so Dawn withdrew the bill.
​
Bus Service. Additionally, in an effort to help expand transportation services to communities affected by the closure of the Memorial Bridge, Dawn successfully sponsored legislation that removed a technical barrier that would have prohibited COAST, a local transit company, from expanding their service in Maine. With the new change in state law, COAST will now be able to expand its public transportation operations to include the towns of Kittery and Eliot, as well as the shopping outlets, healthcare facilities, and Portsmouth Naval Shipyard. The people and businesses of this region are already experiencing the negative affect of the Memorial Bridge closure. This change will help improve accessibility for residents of District 1 and travelers coming to Maine to visit, shop, and work. 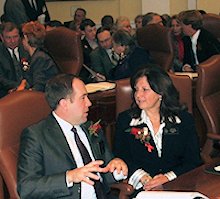 Dawn stood up to the powerful Maine Turnpike Authority when the MTA tried to take homes and build a new toll plaza. She led the fight to get the Office of Program Evaluation and Government Accountability (OPEGA) to check the books and practices of MTA. OPEGA's final report about the MTA was published in January 2011 and is available online.

"Hill has long questioned the MTA's practices and in the fall of 2008 [pushed for] a number of bills intended to bring more accountability to the MTA." Seacoast Online, May 26, 2010 “In a very direct way, she is responsible for shedding the light of day on all this” said Peter Mills (new Director of MTA). Seacoast Online May 2011.Seacoast Online, April 20, 2011

As a response to the findings of the Government Oversight Committee, the Legislature passed legislation to improve accountability and better regulate the MTA as well as require a 5% payment of its operating revenue to the Maine Department of Transportation. As a result of the legislation this session, the MTA will now be accountable to the toll payers and to the state for where and how money is being spent.
​
Dawn continues to support the efforts of the organization "Think Again" with information and advocacy. "Think Again" is a local grass roots organization formed to stop the relocation of the York toll plaza.

Dawn played a major role in the Maine budget as the Senate Chair of the Appropriations & Financial Affairs Committee. In the 125th Legislature (2011/2012) she served as the Ranking Democratic Senator on that committee. Dawn served as negotiator for the State's $6.1 Billion dollar biennial budget as well as the five supplemental budgets presented by the Executive Branch during the 125th Legislative session. Her efforts brought forth a nonpartisan balanced biennial budget and four nonpartisan balanced supplemental budgets that were passed with super majorities in both the House and Senate.
​
As pledged, she stands ready to make decisions that are both sensitive and tough, setting aside partisan politics